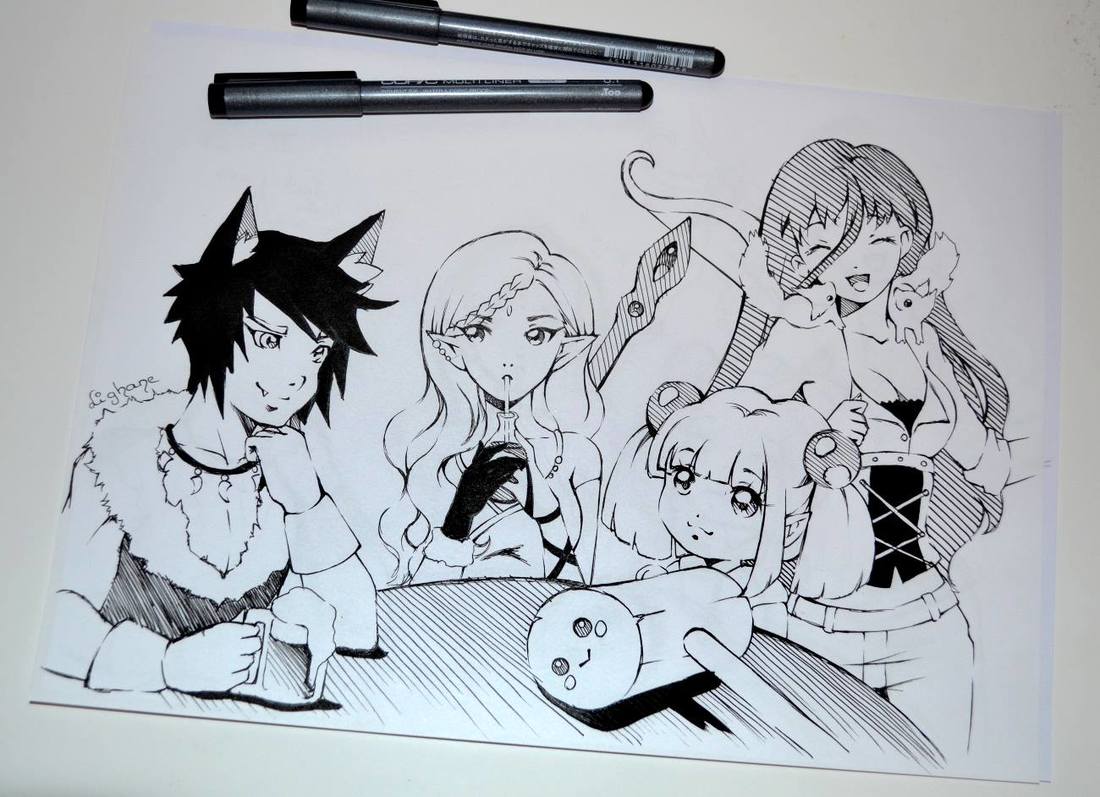 Our adventure begins here ...
​In a world far away, a group of four brave people met in a tavern. They all travelled from all around this mystical world to do one thing. There's hot-blooded William Olaf Lupinious Farradir - also called W.O.L.F. - a dog-warrior. And Viola, a frosty sorceress, sipping her drink. Then there's Huntress Camille with her two trusty squirrel companions, which made not just one person in the tavern think about roasting them over the open fire. And last but not least we got tiny Paladin Genki and her weapon Batsumaru, a strangely smiling hammer ... at least on one side!
These people - as different as they are - came to this tavern to fulfill one epic quest. One awesome quest they all heard about as being awesome ... but noone, not even the mage took note of how to find all the other information they need.
So here they are, four strangers ready to go on an epic quest. Yet the quest is nowhere to be found.

***
Choose wisely: What will the party decide to do next?
"Head over to the barmaid. A bit of flirting might help get all the information they seek."
***

W.O.L.F. is getting impatient. "Where the hell is this ominous person telling us all about this heroic quest?", he screams and slams his hand on the table. Viola, clearly annyoed by his sudden burst of energy, keeps sipping her potion: "We'll know everything we need once the time is right ... or once we dig for the answers."
"Dig you say, eh?" - W.O.L.F.'s mood is not getting any better: "Maybe I'll find the answer on the bottom of a plate full of meat."
"Or better: We ask the barmaid about the quest, I bet she knows more", Viola proposes: "Thinking is not your strong suit, is it, W.O.L.F.?" Faster than anyone could react W.O.L.F. snatches the potion from her hands. And looks at her with an evil glimmer in his eyes. But then, as fast as his outburst was, he leans back, puts his feet on the table and empties the glass in one go. "You might be right here, aye", he adds after a long burp.
"The only question now is", little Paladin Genki interrupts, heads turning towards (and down to) her: "Who's best at getting all the information we wish for from the barmaid over there?"
"I know!", Camille screams, both of her squirrels nearly falling from her shoulders from the sudden outburst: "That's just the right task for one of our two squabblers here!" 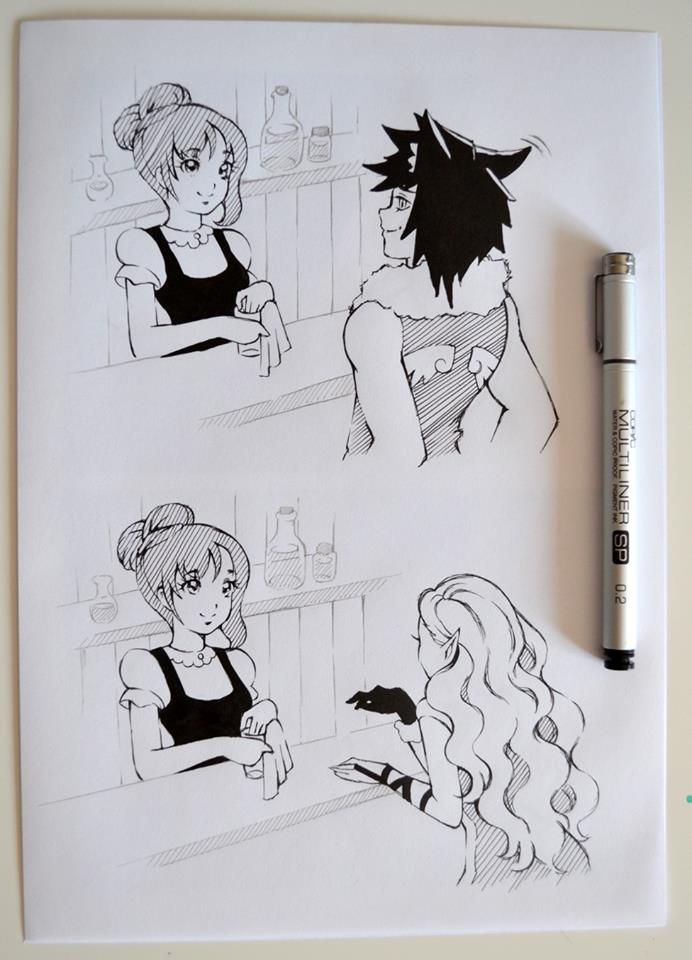 ***
Who'll head over and how will she/he persuade the barmaid to offer information?
"Viola will wrap the barmaid around her fingers talking about the girl's beautiful hair."
​***
​
“Well, there’s only one right decision here - and that’s me”, Viola says with a smile. W.O.L.F. nods reluctantly and looks more interested into squeezing the last drops of juice out of the potion. “Well then, it’s settled - good luck”, Camille adds with a broad smile and slaps Viola on her back.
Clearly annoyed the sorceress shrugs it off and walks over to the bar, rolling her eyes at the party she has found herself caught up with. She sits on one of the small round wooden chairs in front of the bar and orders another potion. A quick glance, flames dancing in her eyes, shuts down a walking-by drunkard who tries to hit her up.
“Back to business”, she mutters to herself: “Gonna get this over quick and leave this group forever.” One second later the broadest smile she ever forced herself to is on her lips: “Hi there - thanks for the potion!” She takes the drink from the barmaid slightly touching her arm, sending a small magical chill through the girl’s arm. A little bit of magical tricks are allowed. The end justifies the means, right? - Viola thinks, quite proud of herself.
“Quite the nice small tavern you have here.”
“Thank you, it’s been a family business for 7 generations now”, the barmaid answers, smiling just as broad. Her slender body does not look like one of someone being in charge of a tavern all day. But her hands, full of weals and scratches, show her hard work. And she’s a fighter type, too, Viola knows after catching a glimpse of the dagger the girl’s hiding at her belt.
“That’s impressive! It’s an honor to meet you, I am Viola, Sorceress Of The South.”
“The name’s Mara”, the barmaid adds and cleans some jars: “Always happy to have kind customers like you.”
“Pleasure’s all mine”, Viola says while touching Mara’s arm once again, sending another chill. The barmaid is clearly irritated, yet she’s not pulling her arm away. Her hand reaches a bit higher, touching one the barmaid’s curls.
“Woah, I love your shiny hair. It looks gorgeous and suits you.”
“Well, thank you”, Mara shyly mutters, clearly not accustomed to getting praised by another woman: “I am not really doing anything special.”
“Well, I’ve been in towns where only elves live and I’ll swear to my goddess: You hair would outshine theirs!” That’s it, now I’ve got her, Viola knows.
“Haha, you’re clearly exaggerating”, Mara stammers: “But you already made my day. Next drink for you is on me.”
“That’s so kind of you. But there might be another thing you can help me with.”
Mara raises an eyebrow: “There is?”
“Just a tiny thing, nothing to worry about”, Viola keeps twirling the curl around her fingers.
“Alright, what may I assist you with?”
“I know about rumors talking about an ancient ghost dragon lurking close by … and I hear there’s a certain someone offering a great reward for slaying this dragon.”
“Aye, everyone around here knows this. It’s a children’s story. But I know of only one person who really believes it is true.”
“And who might that be?”
“That’s old Geralt, the only elf living in these lands. But he’s not living in our village, it’s roughly half a day either through the woods to the north, one day taking the eastern street around the woods or another half a day taking the western route by boat.”
“Thank you - that’s indeed most helpful.” Viola sends another chill, this time through the strands of Mara’s hair.
Then she stands up and walks back to her table, a victorious smile on her face. Some might say it looks slighty evil. But she would freeze those people.
Mara meanwhile stands there, not really sure why she blabbered as much as she did. But after a short while and after squeezing this one curl in her own hands she goes back to cleaning some mugs. Business as usual.

Viola, on the other hand, tells her party about the only trace to the ghost dragon they know have, an old elf named Geralt. Even W.O.L.F. pays attention. Genki shoulders her hammer Batsumaru: “I hope this elf is not some kind of nuts old man. I have seen enough of those in my life.”
“Well, first of all we gotta think about another thing: Which way will we choose?”, Camille asks the group and starts to unroll a map of these lands. Both of her squirrel companions help her and sit on two of the map’s edges. She gives them a thumbs up. “Yep, time for adventure”, W.O.L.F. howls and takes a look at their options. 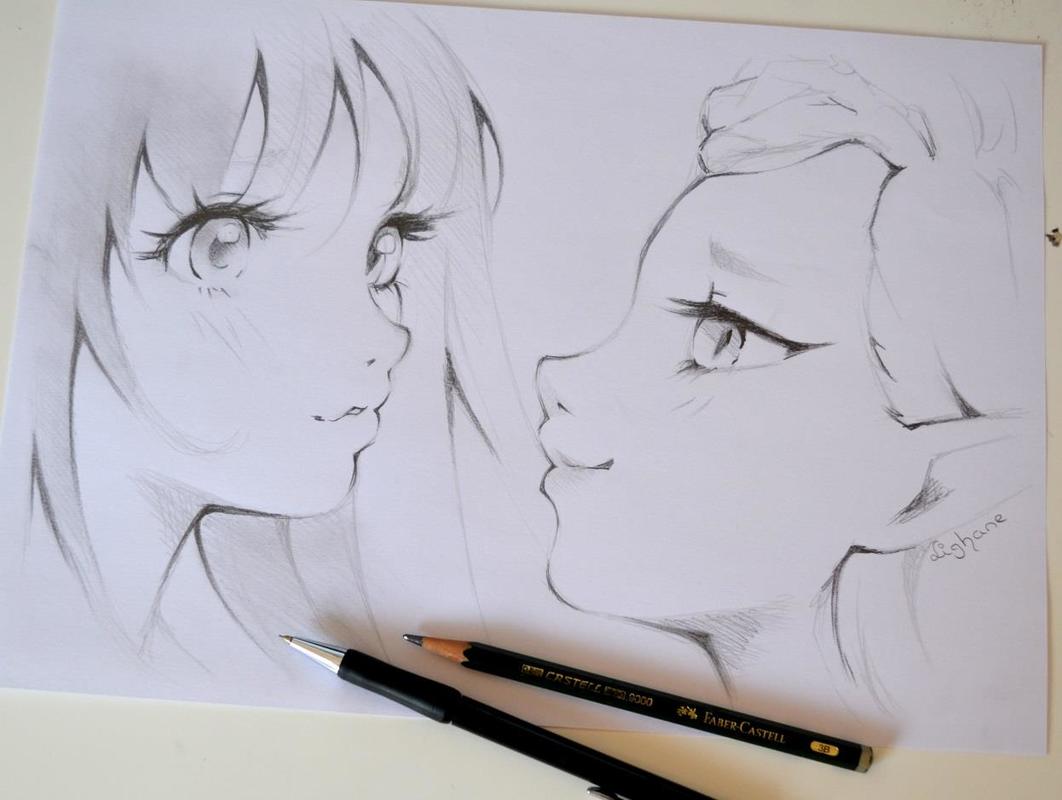 ***
Which path will the party take?
“Walking roughly half a day through the woods to the north.”
***

... It did not take them long to decide upon their path. “The fastest and most straightforward path winds right through this forest”, Viola says and points on the tiny lines meandering through a thick, drawn forest on their map. “It’s settled then”, W.O.L.F., Camille and Genki chime in unisono - and Genki adds: “After a night’s rest we depart when the suns rise.”

The next day Viola, Genki and Camille meet up at the tavern inn’s front door to find W.O.L.F. already practicing. Just watching him punch thin air makes Viola feel exhausted: “It looks like this guy never sleeps. I need a potion to wake up …”
Genki, shouldering Batsumaru meanwhile is checking their supplies: “Dried meat, check. Cheese, check. Tons of nuts … check?”
“My lil’ friends here need to eat, too”, Camille adds with a shrug and points towards her two squirrel companions: “We’re gonna stay healthy guys, right?” Two kisses from her squirrels confirm her words. And with this she’s already on the road with long strides, Genki following in behind. Viola, still searching for another potion in her vial closes the gap a lil’ later. W.O.L.F. is walking, jumping and fistfighting his way besides them in the wet grass, the three suns slowly making their way to the clear blue sky.

Besides some random squirrels (which made friends with Camille’s, both roaming the thick forest beside the broad path) for three hours there were no encounters at all. Then W.O.L.F. who was still kicking and fighting non-existent enemies while walking was calling them over.
“Can you see that? No idea what it is, but maybe it’s connected to that ghost dragon? Or maybe there’s some enemies to fight?” His eyes are shining in a deep orange, like a fire starting to burn in the forge.
What caught W.O.L.F.’s attention, the others now saw, was a small clearing just 30 foot away from the main path with ancient ruins, thrown over pillars and stones covered with moss everywhere.
“Let’s check it out!”, he howls, makes a sudden jump forward …
… and crashes headfirst into the forest floor, Batsumaru entangled between his legs.
“Not so fast, dog-man”, Genki says, picking up her beloved hammer: “You want to get us killed? That’s not our priority, so let’s think this over first. And stop shouting.”
Viola, although she dislikes to agree with W.O.L.F., assesses the situation, her inner scholar awoken: “These ruins are not marked on our map. That’s really strange. We should check it out. This seems special.” With this she steps over W.O.L.F. and heads towards the clearing.